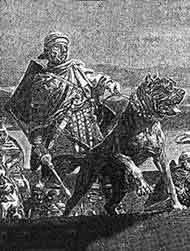 The Cane Corso’s geneology can be traced back to the Canis Pugnax, the Roman War dog of the first century.
They would accompany their handler onto the battlefields where they would act as an unprecedented guardian. The tenaciousness of this dog was so extreme they were used in the arenas to fight against lions, bears, and other wild animals.

The Romans were not the first, but may very well have used war dogs the most effectively. The Roman Army had whole companies composed entirely of dogs. They wore spiked collars around their neck and ankles, made more dangerous by the large curved knives protruding from its ring. Sometimes they were starved before battle, then unleashed on an unsuspecting enemy. Their dog of choice was the great Molossian dogs of Epirus, specifically trained for battle. These dogs, halved starved and ferocious, helped spread the Roman Empire across the ancient world. The Corso was also as a “auxiliary warrior” in battles for the Romans.

For years he has been a companion and worker of the Italian people. His job was to protect property and cattle, work as a cattle drover, and for large game hunting. Their power, courage, agility and tracking ability made them especially valuable with wild boar, stag and bear. His name comes from the Latin word “Cohors” which means Guardian or Protector.

With the decline in big game hunting the cane corso found a home with Italian farmers. They were often used as a driver, moving animals to the market and to the slaughter houses. On the farms they protected the livestock from both human thieves and animal predators, also doubling as a guard dog for homes and estates. With the transformation of the agricultural structure in many regions of Italy, this majestic dog was in danger of extinction. However, with the help of some skillful and caring dog lovers in the mid 1970’s success was made in procuring as many good subjects as possible. Selective breeding began and the cane corso was given a new birth.

Welcome to our kennel CANE CORSO KENNEL “GUARD OF OLYMPUS”

Who would imagine that many years ago, our first contact with a Cane Corso would create a great love that continues for forever and be our great love !!! So, me and my wife we decided to bring our family a new member, a puppy Cane Corso. After years of living with a friend, partner, guardian, our bodyguard, seeing all these rare gifts gathered in a dog decided to work on breeding this exceptional breed.

Our criteria are strong and rigorous, quality farming is a hard road with a lot of hard work. Our goal … very few fully controlled litters per year and high expectations. Healthy dogs free of dysplasia and other diseases, excellent balanced characters (not fearful, timid, nervous) and as well as possible morphological.

Read More »
We use cookies to ensure that we give you the best experience on our website. If you continue to use this site we will assume that you are happy with it.OkRead more